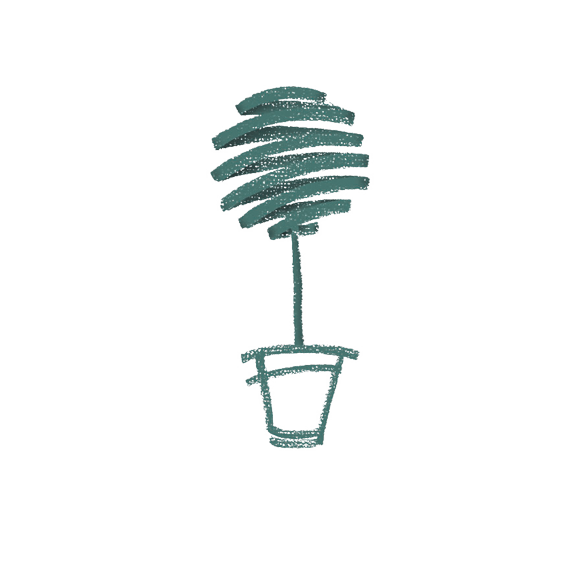 We currently have vacancies for 2 team members, to learn more visit our Join The Team page 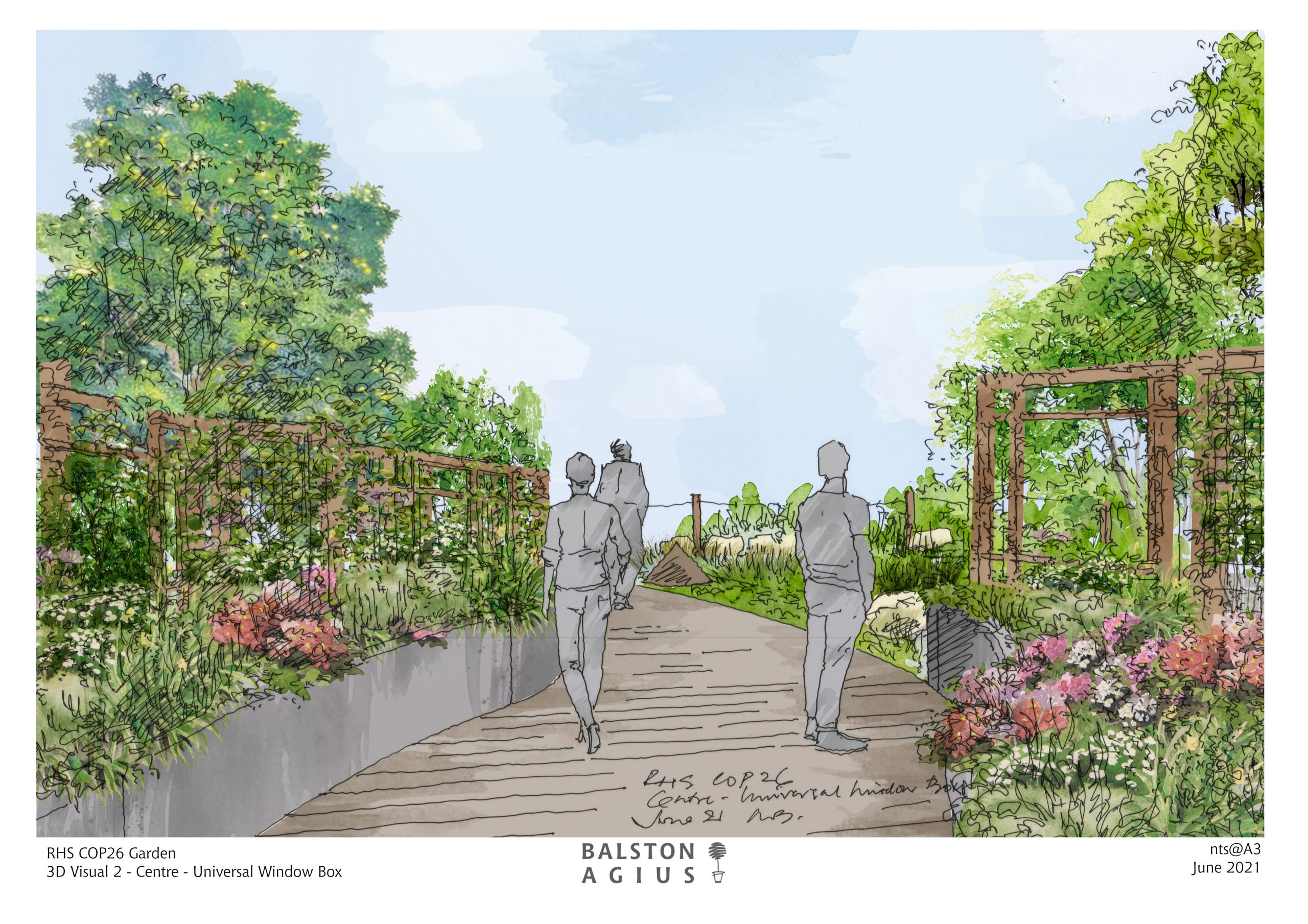 We are excited to announce our involvement in the RHS COP26 Garden at the 2021 RHS Chelsea Flower Show, designed by Balston Agius, led by Marie-Louise Agius, a call to action in response to the 26th UN Climate Change Conference of the Parties (COP26) in Glasgow in November 2021.

The RHS COP26 garden demonstrates how horticulture as practised in our gardens, plants and public green spaces can play an integral part in protecting our planet and people, and to ensure a greener more resilient future for us all.
The garden is organized on the basis of a cycle. The circular narrative displays a degraded environment, followed by adaptation to changing conditions. There is then an area showing mitigation techniques which is followed by a balanced selection of plants responding to the higher temperatures and stormier weather that we can expect in generations to come.

The layout spins around a central point enclosed by two trellis screens and planting boxes. This point is approached by way of a path of recycled scaffold boards, a common building softwood, easily repurposed. The trellis work is constructed from recycled timber and steel reinforcing mesh.

The four primary quarters are subdivided into sectors which represent key issues relating to that quarter. These are expressed in structures and plants.

The first quarter, DECLINE, represents the degradation of the habitat through intensive building, infrastructure and monocultures among other stresses. It also highlights ill-considered practices which thoughtlessly degrade our environment. Sector A represents construction and infrastructure on a highly damaged ground of concrete and gravel. However, the advent of tough pioneering weeds as a sign of hope. Sector B represents the perils of excessive positive drainage which is necessary where impermeable ground surfacing materials are used. Sector C illustrates the consequences of excessive drainage with downstream flooding and the widespread damage that we have seen frequently in Britain and Europe over the last decade. Plants, paving and turf are shown underwater and shrubs and trees collapsed. Sector D alludes to the problems of monoculture, here shown as a sterile lawn artificially maintained by pop-up sprinklers and fertilisers. We could equally well have shown intensive arable crops growing on thin soils charged with chemicals. The message is reinforced by the Chamaecyparis lawsoniana (Lawson cypress) which support few pollinators and little wildlife. Finally in this quarter, Sector E demonstrates the Grey Front
Garden mostly used for parking a car and for relatively sterile planting that contributes little to pollinators or the sustenance of wildlife.

The second quarter, ADAPTATION, is divided from the first by a dead hedge. The quarter represents the kind of planting that might be necessary to adapt to the higher temperatures expected together with bouts of heavy rainfall. Sector F alludes to a relatively dry desert habitat with some big Agaves, while sector G shows a less severe semi desert with Yuccas, Tree Purslane, Aloes and a variety of heat tolerant perennials. The Koelreuteria paniculata (Pride of India), described as a bomb-proof plant for climate change, acts as a pivot for the layout of this quarter. Sector H is a drought tolerant meadow of grasses and forbs which can deal with heavy rainfall from time to time. In the corner is Sector I which is elevated by rocks to show plants needing fast drainage and, incidentally, cope with the underground services in the area. Sector J, a semicircle carved out of the quarter, takes the idea of a Mediterranean Garrigue to create a space of low growing plants emerging between flat stones.

The third quarter, MITIGATION, illustrates ways in which landscaping and design techniques can improve the habitat to the point of making climate change less severe. Sector K concentrates on soil improvement with topsoil cones, compost bins and a field of nitrogen fixing clover. We have to imagine the worms and other soil fauna working away underneath. The next sector, L, controls drainage run-off by means of swales, which slow and absorb water and safeguard against downstream flooding. Alongside, is Sector M, the Wildlife Pond which encourages a broad variety of insects and thence birds, greatly enriching wildlife. Sector N, the Meadow, equally encourages wildlife through its habitat of grasses and forbs. The antithesis of Sector E, diametrically opposite, is Sector O, the Green Front Garden, reminiscent of the RHS campaign Greening Great Britain. Here, paving is permeable, there are log piles and beehives and plenty of insect friendly planting.

Over the Hornbeam hedge, this time live, is the fourth quarter which we have named BALANCE. Here we show a wide collection of plants which could be suitable for the warmer and stormy summer rainfall environment of, say, 50 years time. In Sector P, we show Hydrangea and Clerodendrum representing tender shrubs. In the next Sector, Q, we find fruit, veg and flowers for cutting which might suit the warmer garden, together with a magnificent Orange Tree, a Fig and a Pomegranate. Sector R contains tender perennials and grasses. The next Sector, S, contains another so-called bomb-proof tree for the future, Cladrastis kentukea underplanted by a variety of ferns. In Sector T we have a semi-circular lawn fringed with long grass with forbs for the benefit of insects. Even though a shaven lawn is sterile it is mitigated by the ring of long grass.

At the centre of the exhibit is the UNIVERSAL WINDOW BOX. The public pass through between each box and the intention is to show a variety of climbers, annuals and small shrubs which anyone could plant in their garden or window box, however small, to provide both the degree of mitigation and the achievement of growing. The encouragement of the natural world helps to tackle climate change. It also helps individuals and families to come to terms with a stressful world.

For additional coverage, please see the links below 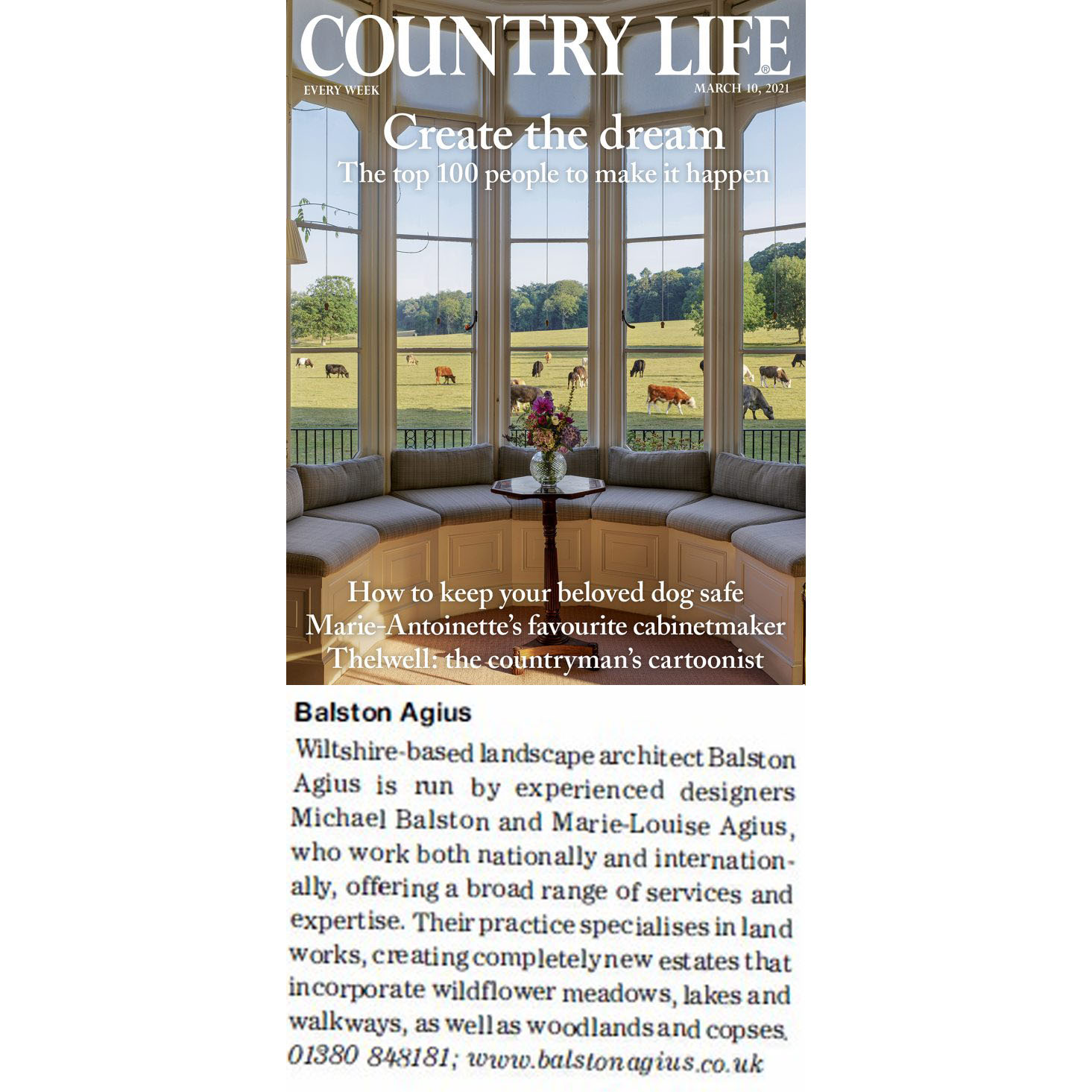 We are once again proud to be mentioned in Country Life as one of Britain’s top Garden Designers! 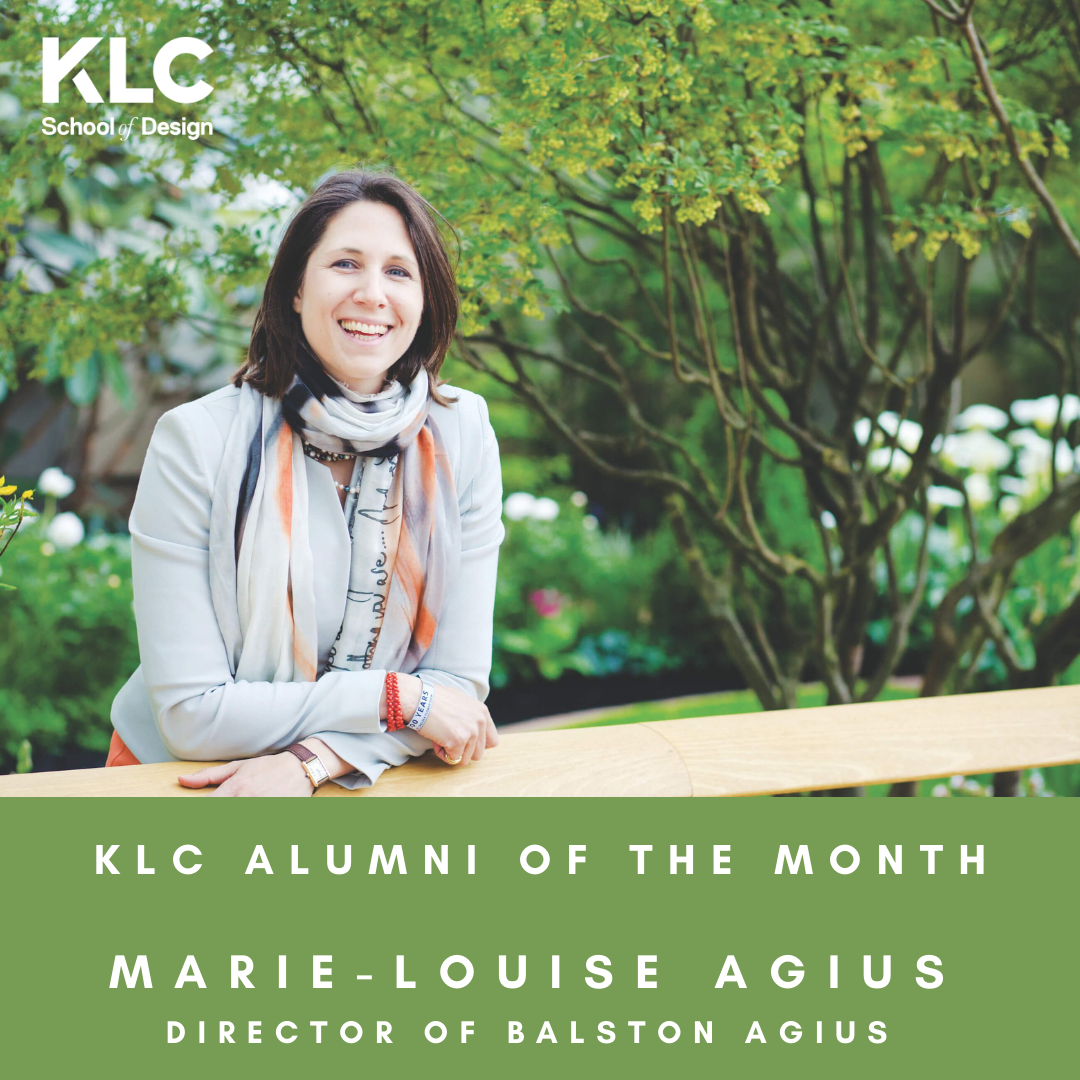 Read the full article on the KLC website: https://www.klc.co.uk/blog/klc-news/2020/klcs-alumni-of-the-month-is-marie-louise-agius-.php 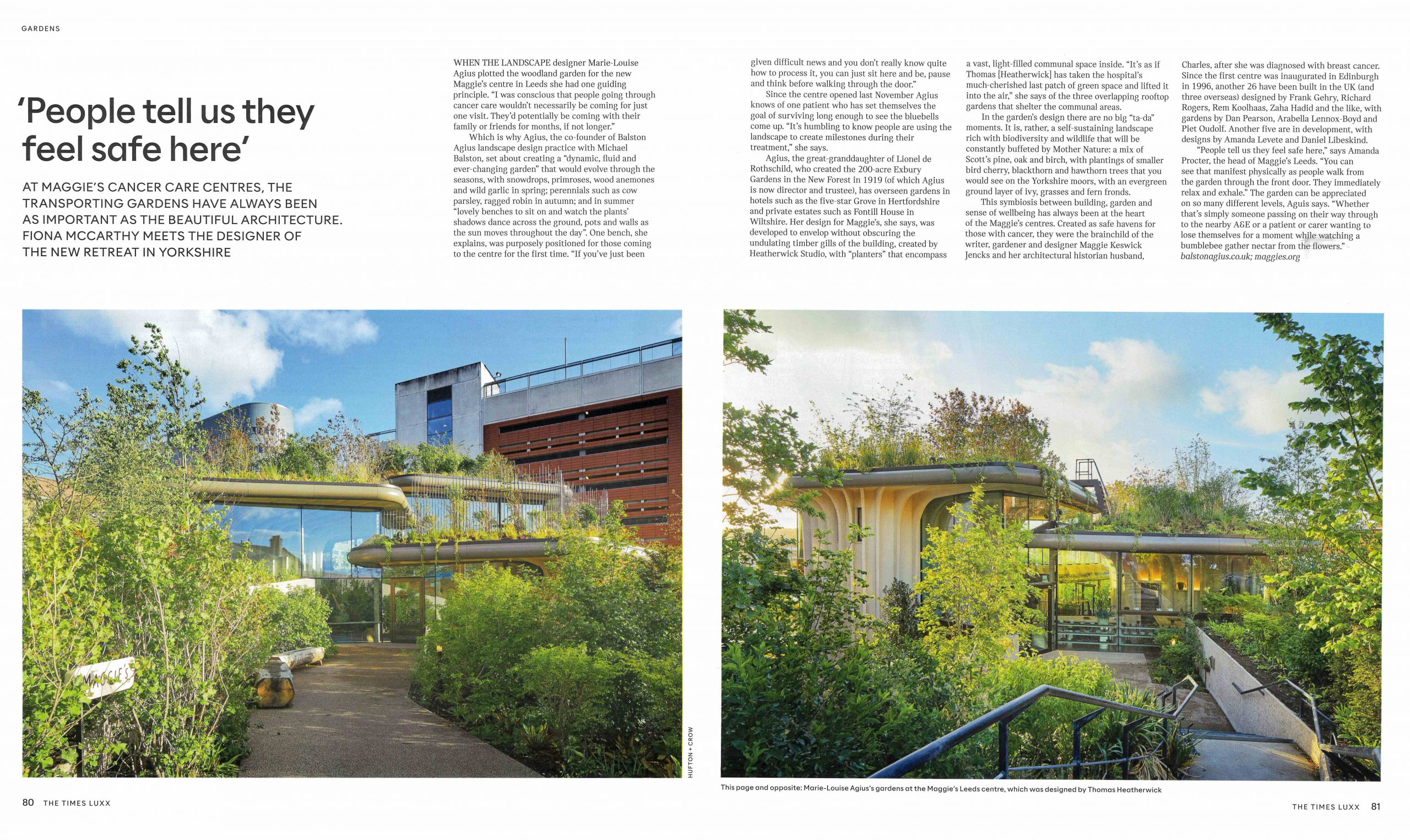 Our work at The Maggie’s Centre, Leeds, features in The Times Luxx. 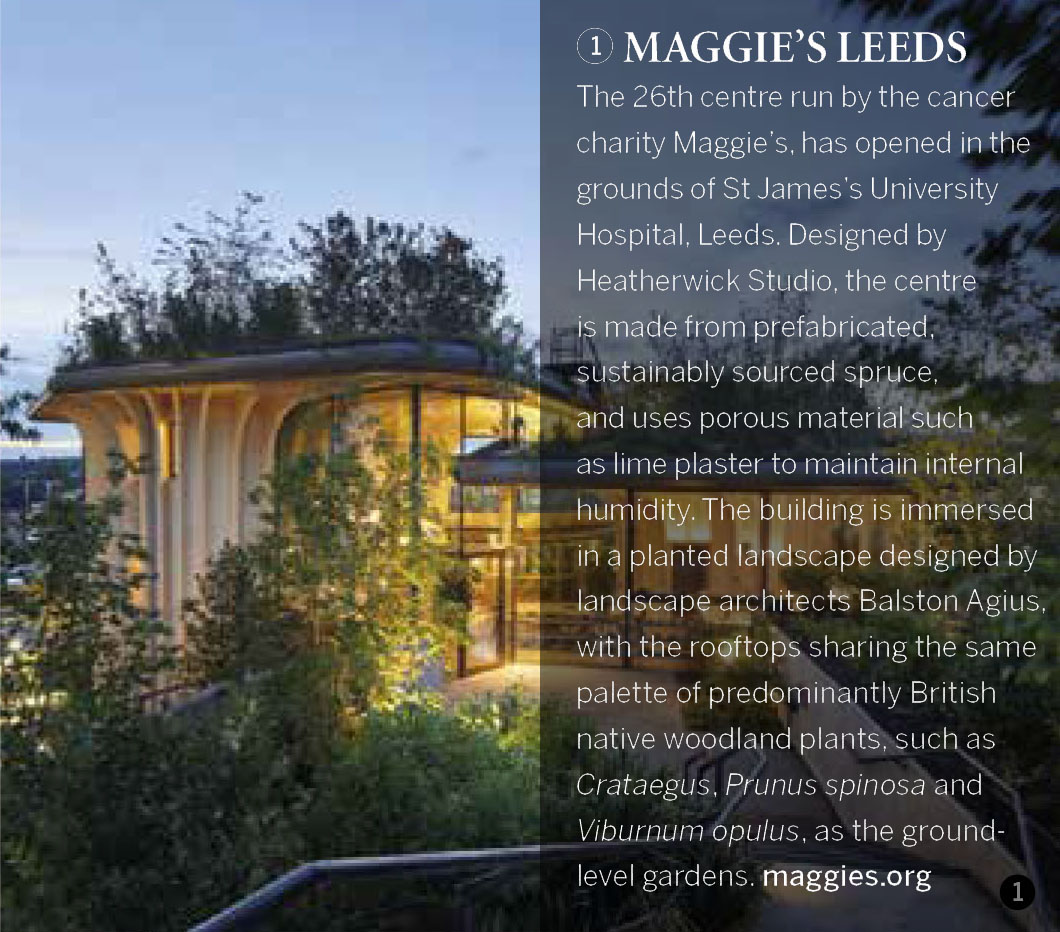 Our work at Maggie’s Leeds features in the August 2020 issue of Gardens Illustrated. www.gardensillustrated.com

Learn about our involvement at Maggie’s Leeds here 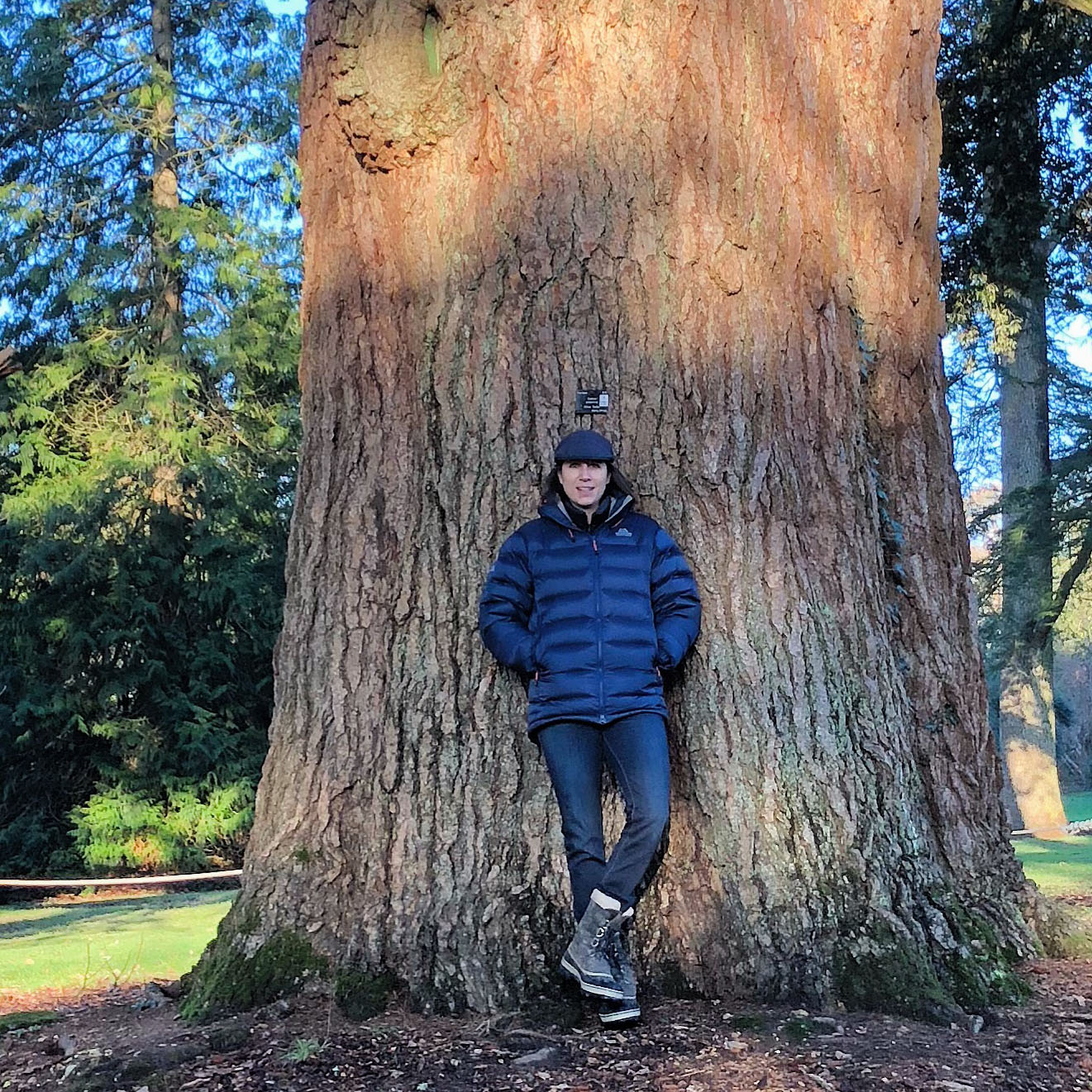 Marie-Louise recently held an online talk with Garden Masterclass on the subject of Structure and Bones: The use of trees and shrubs in gardens and the woodland landscape pulling examples from the gardens at Exbury and the work her family have put in since its inception.

A YouTube recording of the talk can be found at https://www.gardenmasterclass.org/blog-and-podcasts/2020/5/3/marie-louise-agius-takes-us-around-exbury

The full collection of Garden Masterclass online talks can be found at: https://www.gardenmasterclass.org/blog-and-podcasts

Marie-Louise contributes to the virtual garden tour series, with the use of her drone-shot footage of Exbury Gardens. Read the full article here … 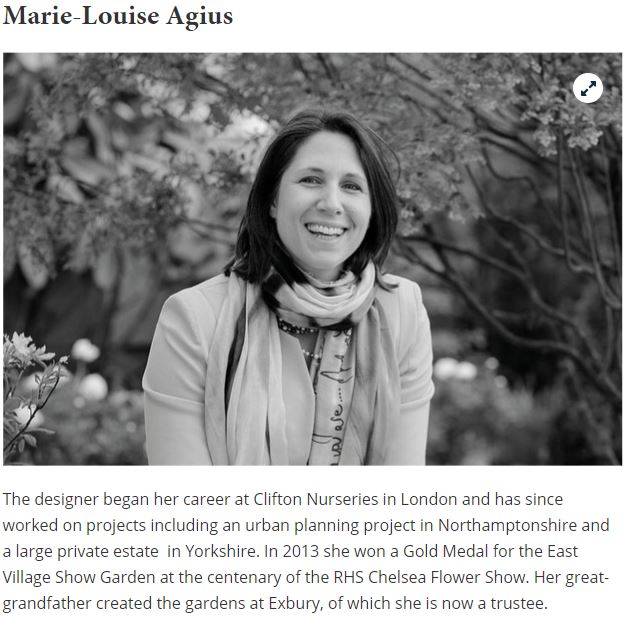 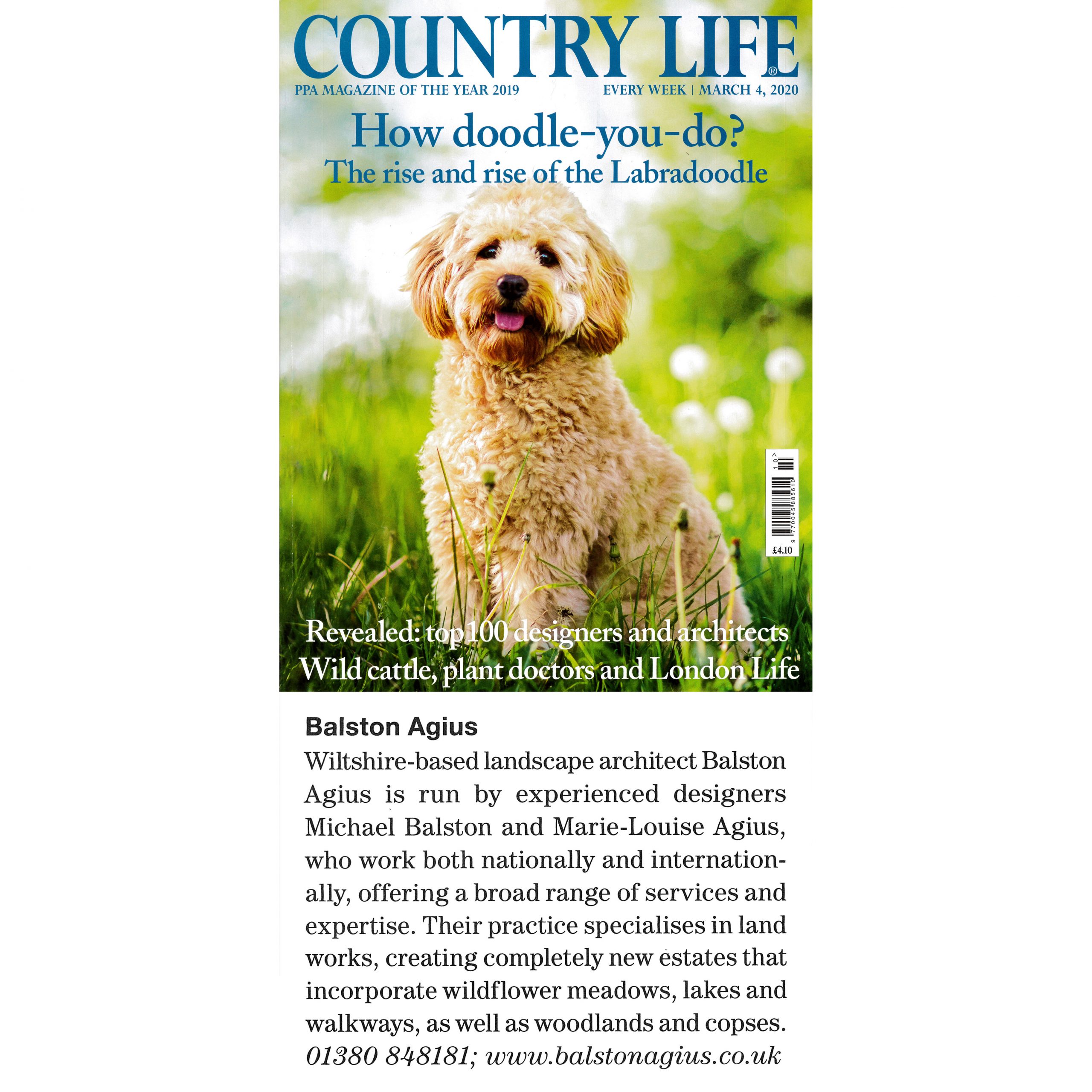 We are once again proud to be mentioned in Country Life as one of Britain’s top 28 Garden Designers! To view the full article click here